What a fantastic surprise for all of us at Ysgol Craig y Don today. Cameron Davies, Jacob Botica and Jason Roberts from RGC called in to show us the WRU National Cup which they won in the final against Pontypridd at the Principality Stadium in April. RGC’s name is now added alongside the great Welsh rugby sides that competed for the cup down the years. It is an incredible achievement and is testament to the players’ hard work and commitment. We are all extremely proud of them, especially Cameron as he is a past pupil of Ysgol Craig y Don.

This Saturday, RGC travel south to play Pontypridd in a winner takes all match to decide the fourth play off place in the Principality Premiership. We wish them al the very best. 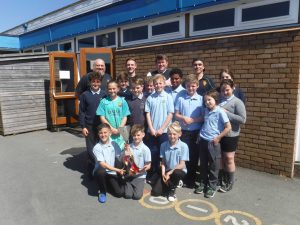